It’s Mother’s Day, and I usually bake on Sundays so that the kids have some kind of treat for their lunches during the week. In the interest of making things easier for myself, rather than make chocolate chip cookies, I decided to go with blondies. What could be easier right?

Here is the recipe from Taste of Home: 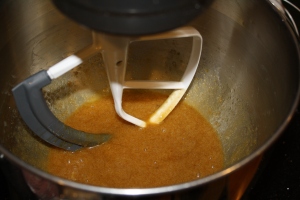 I used a glass pan to make these, and it’s more of a casserole dish, but it’s 13″x 9″ as the recipe calls for.

The recipe said to bake the blondies for 18-20 minutes. I checked at 18, and they were still pretty wet, so I went to 20, but they still were underdone. I baked them for another five minutes, and then took them out of the oven. I stuck them with a toothpick a few times, and the toothpick came out clean, so I figured they were ready.

I didn’t want to overcook them or risk burning the chocolate chips.  As you can see in the photo, the edges were brown, and they appeared to be done. They cooled on a wire rack for about 20 minutes before being cut, and that’s were the proof came out…in the form of a pudding-like substance.

They looked a little underdone here, and I started to worry.

I ended losing about eight blondies total because they were too undercooked to be transferred to the plate. Have no fear though, I balled those up and put them in the freezer, thinking we could eat them on ice cream. 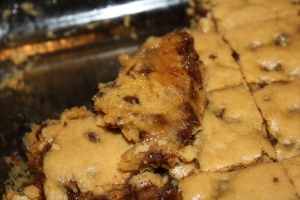 This stuff went straight to Freezerville.

Nothing went into the trash in the end, but the middle was just one big blob.

Is it me, or does this look more like shepherd’s pie than chocolate chip blondie?

In the end, I would recommend putting sheets of waxed paper between your layers to keep the blondies from sticking together. 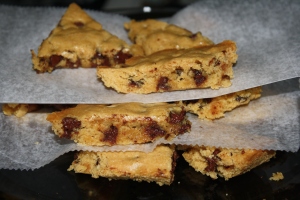 In the end, the yield was 16 blondies.

As I said, I did a few things differently. Maybe if I had beaten those eggs beforehand or used a metal pan rather than a glass one, things would have turned out differently. It doesn’t really matter to the kids though. They took one look at the salvage and went to Tasty Town.