If you were to tell me that you can make a cake in your microwave, this would be my reaction:

There are tons of cake-in-a-cup recipes on Pinterest, so I found one for coffee cake and decided to try it. The photo on Pinterest looks like this: 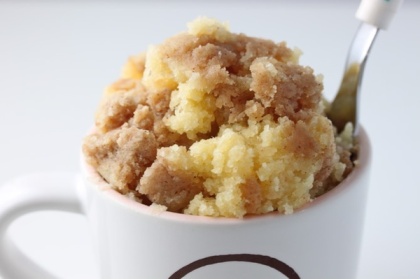 The instructions are really stripped down, homemade, would-make-Martha-Stewart-keel-over kind of simple, all this from prudentbaby.com:

Add a tablespoon of butter.

Soften it in the microwave for 10-15 seconds. Don’t melt, just soften.

Stir in 2 tablespoons of sugar until it’s fluffy and creamy, maybe 30 seconds.

Now you can add some egg. you don’t have to, but without egg it’s more crumbly and less cake-y. You can do a whole egg, but I like to break the egg into a ramekin and stir it up, then split it between two cups of coffee cake, or just use half for one coffee cake. But really, play it by ear. Try it out and see what tastes best to you.

Then stir in 2 tablespoons of sour cream and a few drops of vanilla. We’re talking droplets here, don’t add too much.

Stir in 1/4 cup of flour and 1/8 teaspoon baking poweder.

If you want some crumb topping (you know you do), in a separate ramekin or bowl add 1 tablespoon butter, 2 tablespoons flour, 1 tablespoon of brown sugar, and 1 teaspoon of cinnamon.

Smoosh it together with your fingers for a few.

Now back to your cup. Your ingredients are all mixed up, so…

Add the crumb topping mixture to the cup…

Then microwave it. Start with 1 minute, then do 10 seconds more until it’s done to your liking. For my microwave, a minute 20 seconds does it perfectly.

It will be REALLY HOT when you take it out of the microwave.

Let it cool down for a few seconds, then dig in.

So, I assembled the ingredients and got started.

First there was the butter.

Which I mixed with the sugar until it was fluffy.

Next, I added part of an egg, the sour cream, and a few drops of vanilla extract. 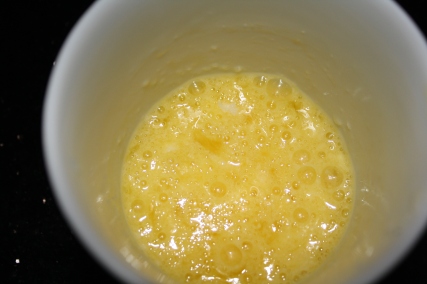 After adding the flour and baking powder, I stirred. It looked a little bland, so I added a pinch of cinnamon.

In a separate ramekin, I made the brown-sugar/cinnamon mixture:

And added it to the cup. 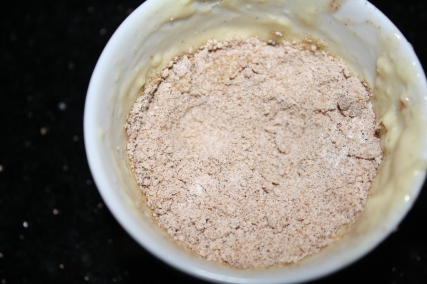 Then the concoction went into the microwave for one minute.

When I opened the microwave door, I was surprised to find… 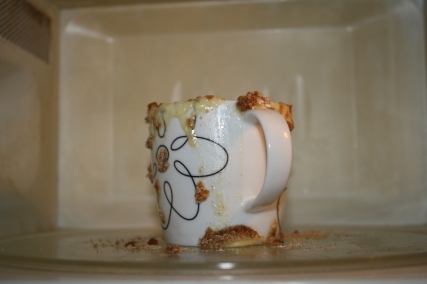 I let it cool, not for a few seconds, but for about ten minutes. It was hot…REALLY HOT. 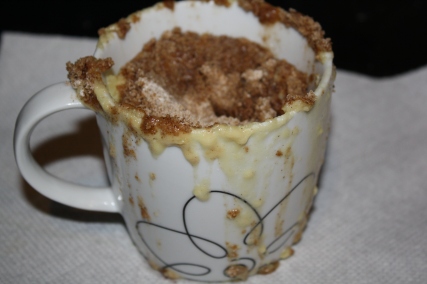 The results were okay. I mean, if you’re desperate for coffee cake, and can’t make it to the 7-11 for some Hostess or Drakes, okay, but I shudder to think what the caloric content of this cake-in-a-cup might be. Is it worth it? Not if you really like cake. The consistency is less cake and more like kuggel, and once you get past all the cinnamon on top, there’s not much flavor below.

← Pan-Handling with Baking Soda, Peroxide, and Elbow Grease
Cleaning the Microwave with Vinegar →