So I cut the mozzarella sticks and froze them for a couple of days. 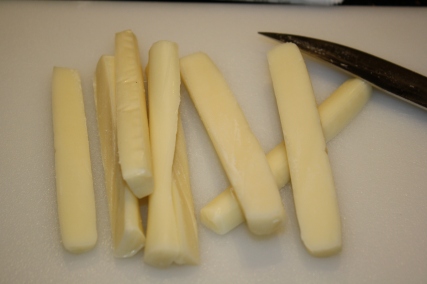 And then they were ready to be coated in egg, flour and cheese/bread crumbs mix.

There was a bit of a challenge covering the sticks with egg though. In some cases the cheese sticks had curled a little, so they were hard to roll in anything. I’m not sure if that means that I froze them for too long, or what. Also, they had to be rolled in everything by hand because it just wasn’t easy to use any kind of utensils with them, so that made the job messy. 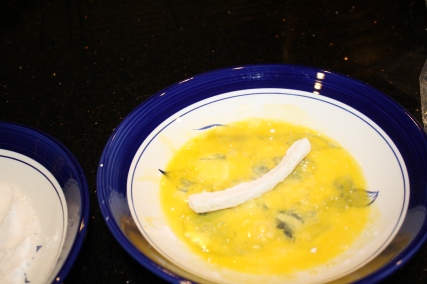 In order to better coat the sticks, I took the cheese/bread crumbs mix out of their bowl and put them in a plastic bag instead.

And then they were ready to go into the oven. I was a little worried, because the breading was a bit on the thin side. 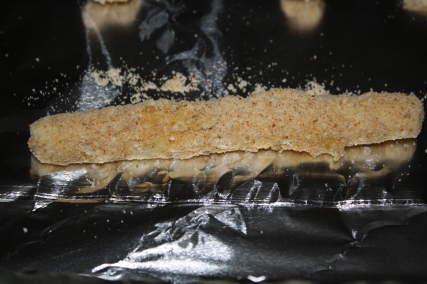 Until the cheese started to ooze, and then we tried them.

Meh. Not very tasty, in fact they were quite bland. I think it would be better to put some seasoning into the breading, or to start with Italian bread crumbs, which the original recipe did not suggest, though in the picture, it looks like there may be some other seasonings on there not listed in the recipe.

I think I am finding that if you want to feed kids the kind of junk they like, it’s hard to do it in a homemade style. You can’t have it both ways.