Risotto is a common dish in Italy, but here in the States, where we like our meals to be quick and easy, it’s more of a delicacy. That’s kind of a funny thing to say about rice, don’t you think? 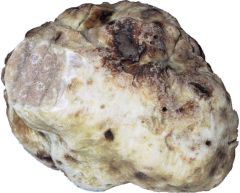 In French, this is “ze white truffle.” Or at least in the French my father-in-law uses.

My brother has a great story about going to a fancy restaurant for a special occasion in New York City, where the special that night was white truffle risotto. They ordered a plate and it was delicious, but then the bill came, and they were stunned that the dish cost $60! I’m not doing his version of the story justice, but I will say that ever since he first told us that story, I have wanted to try white truffle risotto. (Plus I have also made a point to ask how much the special costs before I indulge.)

White truffles come from a region in Northern Italy. Wikipedia describes them as “the fruiting body of a subterranean mushroom” which I guess means it’s like the mushroom’s nads.

Interesting thing about truffles in this age of technology: In order to harvest them they must first be found from where they grow under leaves or soil, and this is accomplished using pigs or dogs whose keen sense of smell can detect their fragrance.

For my recipe, I couldn’t find any actual truffles. I have no dogs or pigs, and a search of my local stores, including Whole Foods and a local gourmet shop left me hanging, so I opted instead for white truffle oil. The oil doesn’t actually contain any truffles, but it was pricey, at about $14 for a 3.38 oz. bottle. It is imported from Italy, but it’s just olive oil and something called “white truffle aroma” which is probably a synthetic form of truffle.

So now I had to find a recipe that didn’t call for actual truffles. I found this one on the boards. The photo on Pinterest looks like this: 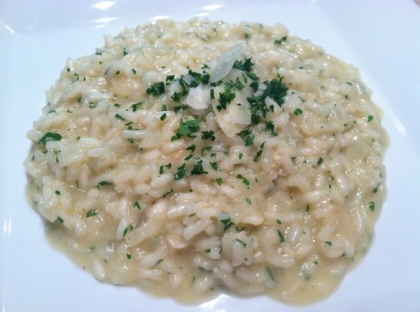 If you have read this blog before, I think you know that I tend to improvise a bit. First of all, I didn’t realize that I was out of onions until I had started cooking, so I substituted shallots, which worked just fine. Also, I used Romano cheese instead of Parmesan because that’s what I had on hand.

First I brought the chicken broth to a slow boil. I like that the recipe uses broth instead of stock. Broth is something I almost always have on hand in the house. Stock, not so much. 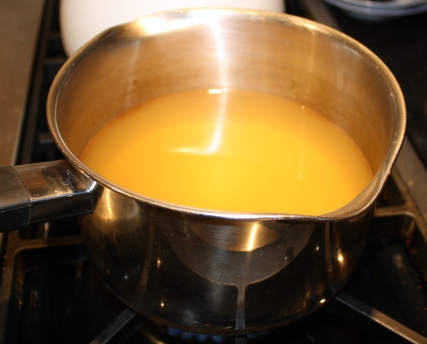 In a separate pan, I got the oil and shallots going, just until the shallots got soft, but not brown. This took a few minutes. 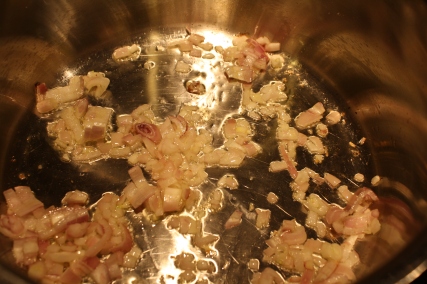 Then I added the rice and stirred for a minute or so, just enough to coat the grains with the oil.

Next, the white wine was added, and cooked until it was absorbed. 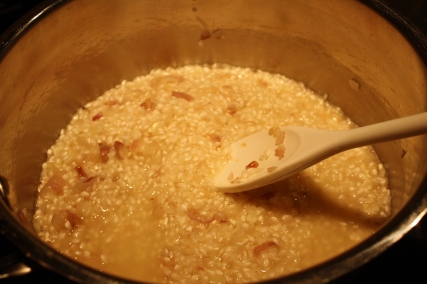 And then it was time to add the chicken broth, a little at a time. Basically you add half a cup, stir until it is absorbed, then add another half cup, and continue until all the broth has been absorbed and the rice is nice and creamy. This process is why risotto hasn’t really become an American staple, I think.

Once it was all cooked, I added the truffle oil, Romano, butter and parsley.

The dish was delicious, with a bit of a licorice twinge to it. Even those who usually eschew rice on the table proclaimed it heavenly. We had just a little bit left over, and that should warm up quite nicely in the microwave as leftovers. 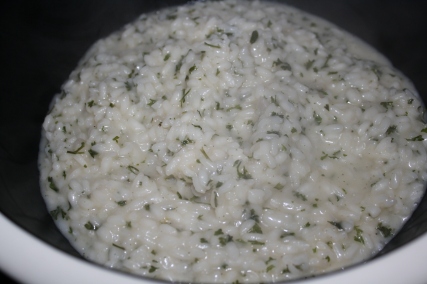 ← Too Much Excitement – Unclogging the Drain With Vinegar and Baking Soda
What Do You Get The Dad Who Has Everything? The iDad! Happy Father’s Day! →

One thought on “White Truffle Risotto”