I Scream, You Scream, Let’s Just Eat This Ice Cream

Years and years ago, I got, and it may even have been as a wedding gift, an ice cream maker. In all of the time that I have owned this thing,  I think I have made ice cream once or twice, but you have to freeze the bowl for a day beforehand, and I haven’t always had the freezer space to spare, so…

Times have changed though. And now that it’s summer, I thought I might try my hand at some different flavors, including peanut butter cup ice cream. The photo on Pinterest looks like this:

1. Make the base: In a medium mixing bowl, use an electric mixer to combine peanut butter and sugar until smooth. Add milk and mix on low until sugar is dissolved- a full two minutes. You don’t want to be tasting crunches of sugar in your ice cream, so give it a chance to dissolve. Mix in heavy cream and vanilla and beat until well combined and smooth.

2. Process the ice cream: Turn on your ice cream machine, pour the base in the freezer bowl, and let mix until thickened, about 25 to 30 minutes. A couple of minutes before you’re ready stop the mixing, add in the chopped peanut butter cups. The ice cream will be a soft-serve consistency. You can eat it right away, or freeze to eat later. If you freeze it for later, it will be more ice-cream-scoopable. Let it sit out for a few minutes before you try to scoop it.

*This recipe is GLUTEN FREE adaptable. If you’re preparing this recipe as Gluten Free, make sure you use Reeses snack size or miniatures (those are known to be GF), and use a brand of peanut butter that is recognized as GF.
*Here’s an easy way to measure sticky peanut butter: Just spray the measuring cups with nonstick spray before you spoon the peanut butter into them. It’ll slide right out!
*Make sure you freeze your ice cream processor’s freezer bowl for a full 24 hours before processing your ice cream.

So, I froze the bowl of my ice cream maker overnight, and got started…

First I mixed the peanut butter and sugar together. RecipeGirl has a great tip there about spraying the measuring cup with nonstick spray. It really made a difference.

Then, I added the milk and mixed a bit more before pouring in the cream and vanilla extract. Two differences here for my recipe: I used skim milk, because that is what we have in the house, and heavy cream, but not whipping cream. I imagine the whipping cream would be a bit fluffier, but the regular heavy cream worked fine as well. 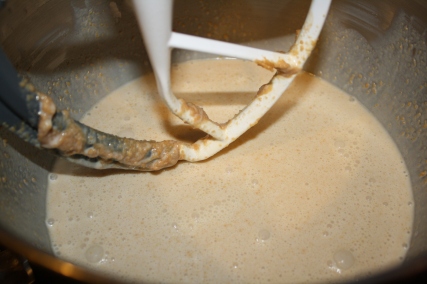 Once those were thoroughly combined, the whole lot went into the machine.

While the ice cream was churning, I cut up the Reese’s peanut butter cups. RecipeGirl used 8-10 regular sized PB cups, but I used the miniatures, about 20 of them, and cut them into quarters. I thought it could have used even more cups, perhaps the whole bag, but one of my visiting taste testers here in the Practice kitchen said there were enough as it was. My point is, judge for yourself. For some, I’m sure even the whole bag would be insufficient. 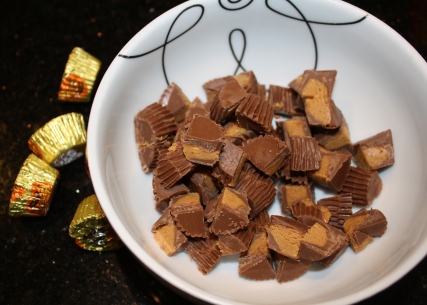 After 25 minutes, the ice cream was almost ready, so I started adding the PB cups a few at a time, but after three or four additions, my ice cream maker put up a fight, and refused to do any more churning. As a result, I had to mix the cups in Coldstone Creamery style — by hand. 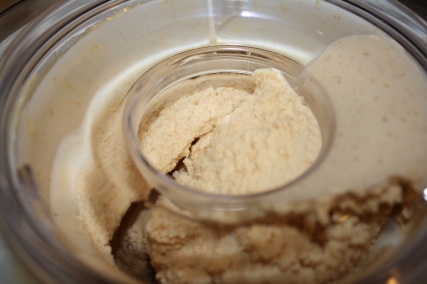 Overall, this ice cream is THE BOMB, very rich and delicious. All of our taste testers in the kitchen received a heaping helping, and a few (including myself) found that a little went a long way. It was yummy, but a small scoop was enough for me. 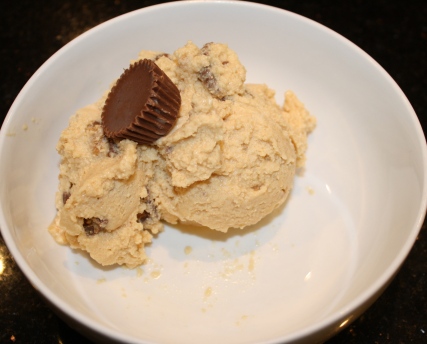 I stuck it in the freezer to harden. Later, I’m hoping to put it on a cone…and I think Homer Simpson can best describe what I expect it to taste like:

← CONTEST!! – I Never Promised You A Rose Garden
Soft Almond Sugar Cookies (If at First, You Don’t Succeed, Try Making Them Smaller) →