I haven’t baked in a while, and I wanted to do something unlike anything I’d done before, so I found this recipe for Soft Almond Sugar Cookies on the boards. The photo on Pinterest looks like this:

I also had a helper in the kitchen today, and it was lovely having someone to add the ingredients and run the mixer. 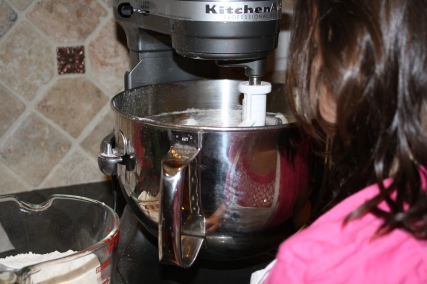 First we put the butter, sugar, and shortening into the bowl and mixed until they were smoothly combined.

Then we added the eggs and almond abstract. In a separate bowl, I combined the flour, cornstarch, baking powder and salt, whisking them together to get rid of any lumps. Then we added the dry ingredients to the sugar mixture a little at a time until it was all combined.

Next I poured about half a cup of Sugar in the Raw out on a plate.

I used a tablespoon to scoop out the dough and then rolled it into balls which were then rolled in the sugar. 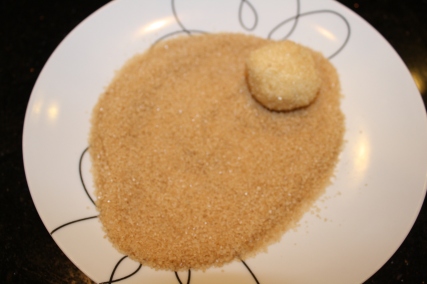 I put them in the oven for four minutes… 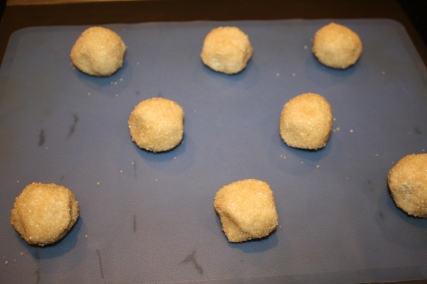 …and then flattened them out with a spoon and cooked for four more minutes.

The original recipe cautions against baking longer than 8 minutes, but when I pulled them out, the cookies really didn’t seem to be thoroughly cooked. Not only were they extremely soft, but they were kind of oily.

The second set, I baked a little bit longer (about 2 minutes) and they turned out a little better, but there was still a bit of oily residue on the baking sheet.

So then, I decided to try making the cookies a bit smaller. This time, I used 1/2 tablespoon of dough per cookie, and that worked perfectly. They still baked for 9 minutes instead of eight (four, then flatten, then five) though.

Very yummy cookies, sweet, with a delicate twinge of almond, and soft, though with a sugary crunch from the Sugar in the Raw. It might be interesting to add actual almonds to the cookie, perhaps ground finely, as well.

← I Scream, You Scream, Let’s Just Eat This Ice Cream
Hooray for the Red White and Blue Cupcakes! →

One thought on “Soft Almond Sugar Cookies (If at First, You Don’t Succeed, Try Making Them Smaller)”