For a while now, I have been thinking about making a crystal ball. Not for my stint at the wizard camp, but I thought it would be a fun craft for the bunch of Harry Potter fans we have over here. I looked on the boards, and there weren’t any ideas for crystal balls, but there were quite a few for snow globes. Some of the photos on Pinterest look like this: 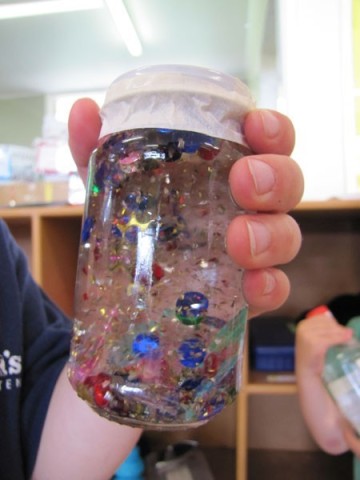 I wanted the glitter inside my crystal ball to float slowly, so I looked at different recipes for the liquid inside, and some suggested glycerine while others recommended using baby oil. I had baby oil (Digression here: Why do they even make baby oil any more? You can’t put it on babies because it’s not good for them. You can’t used it as adult moisturizer either because it’s too oily, and you can’t even use it like I did when I was a teenager – as a tanning oil – because the sun will sear the flesh right off your body.) leftover from when my first kid was born, so I decided to use that instead of glycerine.

In addition, I kind of wanted a disco-ball effect inside, so I got a few mirrored tiles to put inside the bed of the globe. You can use an ordinary jar for these, but I decided to used a nice round snow globe that I got on sale from Michael’s for $4.99.

The globe instructions recommended sanding the platform as well as the bottoms of the mirrored tiles, so I did that quickly with an emery board. 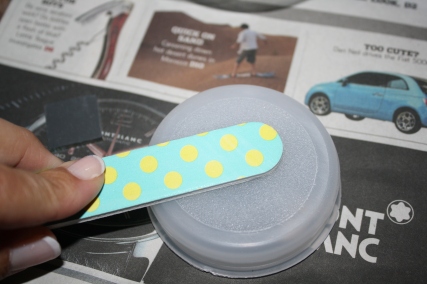 Then I applied hot glue to the backs of the tiles…

and put them into place on the globe’s stopper.

Next, I filled the globe half-way with water… 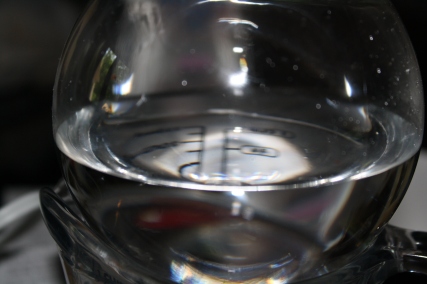 and then filled the rest with baby oil and a few drops of food coloring.

I put in about a tablespoon of glitter, and that turned out to be way too much.

I also didn’t like that the oil and water could never combine, which I knew would happen, but I didn’t like the effect for my globe at all.

So I started over. My original idea, when I thought about doing this project, was to use dishwashing liquid because it’s nice and thick, so the glitter would fall slowly. As it turned out, I had some Palmolive baby dish soap under the sink, and that turned out to work really well because it doesn’t produce a lot of bubbles like regular dish soap might.

Then I just used a few pinches of glitter, and voila!

When you put it under the light, the mirrored tiles produce a cool “mysterious” effect.

I’m looking into my crystal ball now…and…hmmm. Is that you I see in the future with your own homemade crystal ball?

7 thoughts on “DIY Crystal Ball – I Can See Clearly Now”