A couple of months ago, I decided to try to make Shrimp Scampi. This I did without a recipe, kind of winging with what I thought would go in there: garlic, butter, wine, salt, pepper, and of course, shrimp. My family was very happy with the result, but I couldn’t help feeling like I wasn’t really following the letter of the law, so I went looking for an actual Shrimp Scampi recipe on the boards. The photo on Pinterest looks like this:

1. Cook angel hair pasta or linguini according to package directions. Meanwhile, melt 1 cup of butter in a skillet. Add in shallots and garlic and cook for about 5 minutes stirring constantly (you don’t want them to burn)

2. Add shrimp and cook over medium heat (4-5 minutes or until shrimp turn pink, make you sure flip them over so both sides are cooked)

3. Add wine, lemon juice, parsley, salt and pepper. Cook for another minute or two and pour shrimp mixture over pasta and serve.

First, I used frozen shrimp. I don’t like to use shrimp that are too big, like JUMBO shrimp, because I find they can be a bit tougher than the smaller, medium-to-large ones.

I took the shrimp out of the bag, and put them in a bowl, where cold water ran over them for about 5-10 minutes.

Next, I deveined the shrimp. Now, the package said that they were deveined, however, they still had tails and shells to be removed, plus, there was still a bit of vein in the tail, which I removed. But then, here’s the tricky part: Did you know that shrimp have another vein that runs down the other side? 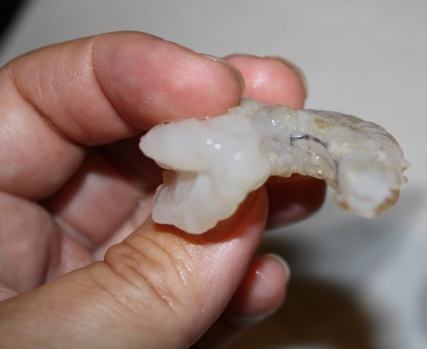 I always remove those as well, and then, I put the shrimp out to dry a bit on a paper towel while I got the pan ready and started boiling the water for the angel hair.

Once the pan was hot, I added one tablespoon of butter to melt.

Then, I put in the garlic and shallots. 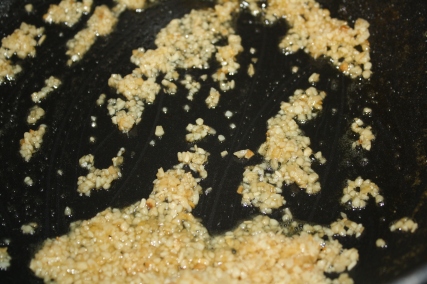 After that, I melted the rest of the butter and  cooked the shrimp.

After about two minutes, the shrimp were turned over and cooked until they were uniformly pink. 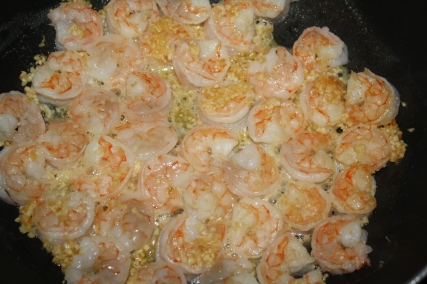 Next, the white wine, lemon juice, salt, pepper and parsley, and cooked for about five minutes to burn off the alcohol in the wine. 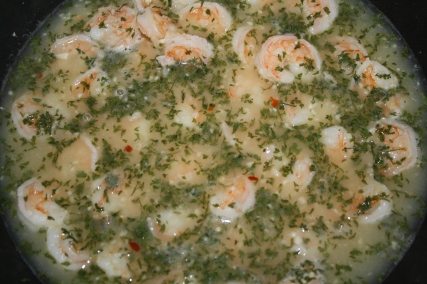 And then the shrimp and sauce were poured over the angel hair when it was done. Served with a bit of Parmesan cheese over top, the dish was delicious!