I’m still in that cinnamon state of mind, which has kept me looking for different cake recipes. Recently, I came across one for cinnamon crumb cake,on the boards, and it looked pretty yummy. But I wonder, is “New York Style” like New York City, or is it more of the state as a whole, because, the two can be very different. In any case, the photo on Pinterest looks like this: 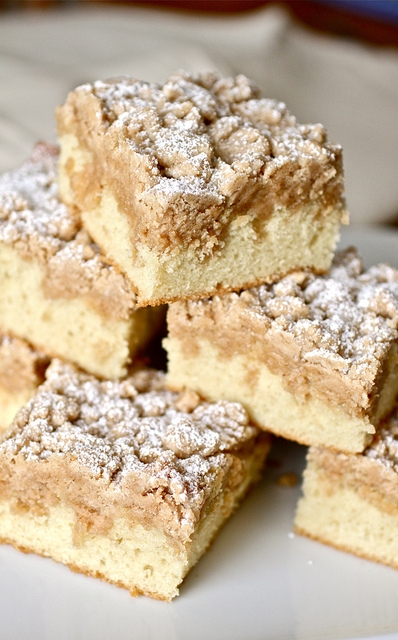 Don’t be tempted to substitute all-purpose flour for the cake flour, as doing so will make a dry, tough cake. If you can’t find buttermilk, you can substitute an equal amount of plain, low-fat yogurt. When topping the cake, take care to not push the crumbs into the batter. This recipe can be easily doubled and baked in a 13 by 9-inch baking dish. If doubling, increase the baking time to about 45 minutes. Cooled leftovers can be wrapped in plastic wrap and stored at room temperature for up to 2 days.

To make the topping: Whisk sugars, cinnamon, salt, and butter in medium bowl to combine. Add flour and stir with rubber spatula or wooden spoon until mixture resembles thick, cohesive dough; set aside to cool to room temperature, 10 to 15 minutes.

In bowl of standing mixer fitted with paddle attachment, mix flour, sugar, baking soda, and salt on low speed to combine. With mixer running at low speed, add butter one piece at a time; continue beating until mixture resembles moist crumbs, with no visible butter chunks remaining, 1 to 2 minutes. Add egg, yolk, vanilla, and buttermilk; beat on medium-high speed until light and fluffy, about 1 minute, scraping once if necessary.

Transfer batter to baking pan; using rubber spatula, spread batter into even layer.  Break apart crumb topping into large pea-sized pieces between your thumb, pointer, and middle fingers and spread in even layer over batter, beginning with edges and then working toward center. Bake until crumbs are golden and wooden skewer inserted into center of cake comes out clean, 35 to 40 minutes. Cool on wire rack at least 30 minutes. Remove cake from pan by lifting parchment overhang. Dust with confectioners’ sugar just before serving.

Okay, in the interest of full disclosure, I am going to say right up front that I didn’t use the cake flour. This recipe had a lot of complicated instructions, and I was feeling a little tired of it telling me what to do, so I did things my own way. No cake flour. I wasn’t trying to make a statement, I just didn’t have any cake flour in the house, and I thought it might be interesting to see if I could work around that challenge, so that you might be able to just use what’s in your pantry too. In order to make up for using all-purpose flour, I used a little more butter, with hopes that my cake wouldn’t be “tough” or dry.

First, I got the parchment ready in the pan. I’d never used double parchment before. It was a little awkward, but once the cake was done, it turned out to be a good thing. 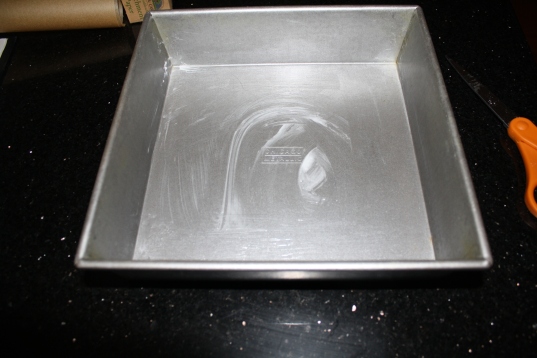 I used shortening instead of spray.

Next, I combined the flour, sugar, baking soda and salt. Again, this was a different experience for me. I can’t ever remember putting all the dry ingredients in first.

Then I added a whole stick of butter, one tablespoon at a time, and beat it until the mixture had the consistency of small pebbles.

The egg white, vanilla, and buttermilk were added then, and while they were mixing, I put together the crumb topping ingredients in a separate bowl. 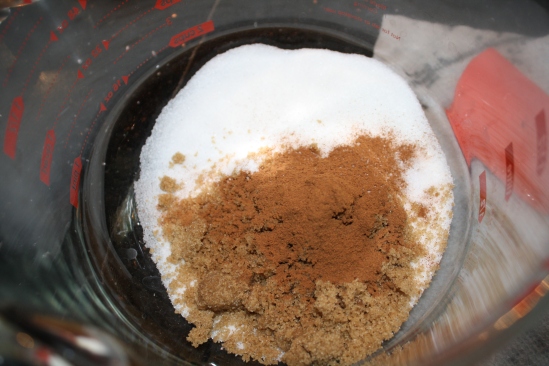 Those were whisked with melted butter to create a dough that had the texture of Moon Sand. 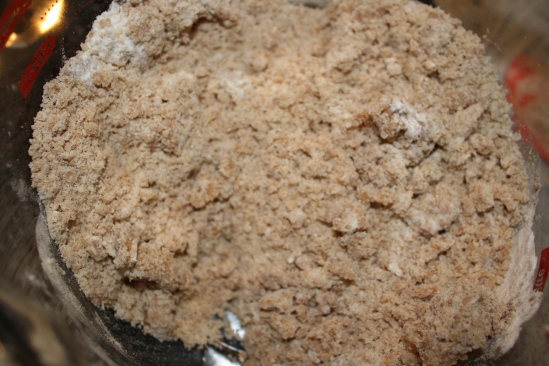 The cake dough was very thick. It went onto the pan, and I spread it evenly with a rubber spatula. 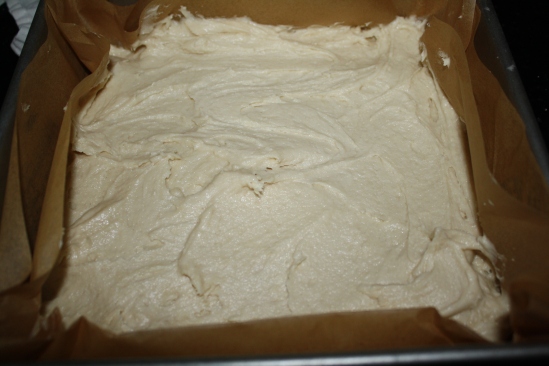 Then the topping was sprinkled on top.

After it had cooled completely, I removed the cake, still in the parchment, from the pan. 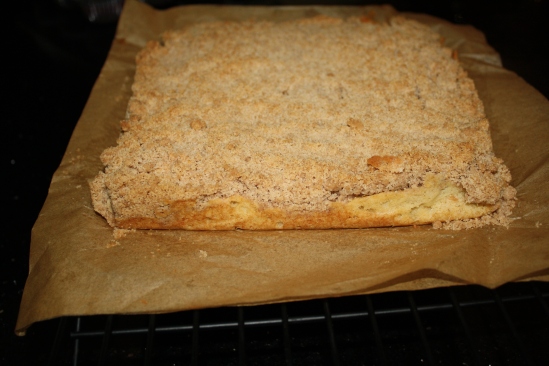 Overall, the cake was good. Not dry or tough at all. My only issue was that the crumb topping was as thick as the cake itself. Perhaps if I had used the cake flour, I would have gotten a more substantial cake layer, but, it was still good. One other thing that might have made it better: Before the cake goes into the oven, take a knife and push some of the topping down into the batter. I think that would have combined the cake and cinnamon flavors a bit better…but then, would it no longer be New York Style?