Put Your Potatoes In – To This Gnocchi Recipe

Being a woman of Italian descent, I grew up eating gnocchi and have loved every single one I’ve eaten. It’s pasta, but it’s a dumpling, and when it’s done right, it just about melts on your tongue. When we were younger, gnocchi was always a special treat in our family, and I can remember our father driving us to an out-of-the-way restaurant called Vesuvio’s to eat what he felt then was the best of them. Since then, we’ve made tons of gnocchi at home, and they’ve mostly come frozen from the grocery store, our favorite

brand being Scaramuzza’s, which is manufactured outside of Philadelphia.

Gnocchi originated in Italy, though the Romans most likely copied the idea from dishes they discovered in the Middle East. Nocchio in Italian translates to a “knot in wood” (get it? Pinocchio?) or the dish may also get its name from the word for knuckle, which is nocca. (All of that is from Wikipedia, btw, I don’t want you thinking I’m like the Cliff Clavin of food. That’s Alton Brown‘s job.) But that makes a lot of sense when you think about it because traditionally, a gnocchi is roundish and is scored with a few little lines. (Look down at your knuckle to see what I mean.)

I have always wanted to try making gnocchi from scratch, not only because it’s delicious, but also because you don’t need a machine or special tools to make this kind of pasta.  I found a recipe for homemade potato gnocchi on the boards, and gave it a try this past weekend. The photo on Pinterest looks like this:

Wash potatoes and place them in a large pot of boiling water. I salted the water. Boil until tender, about 45 minutes. When soft remove them from the water and let cool.

First, I started out with seven potatoes, but I can tell you that was way too many, because I had to freeze about half of this dough in the end. Basically, start with three or four medium-to-average sized potatoes. 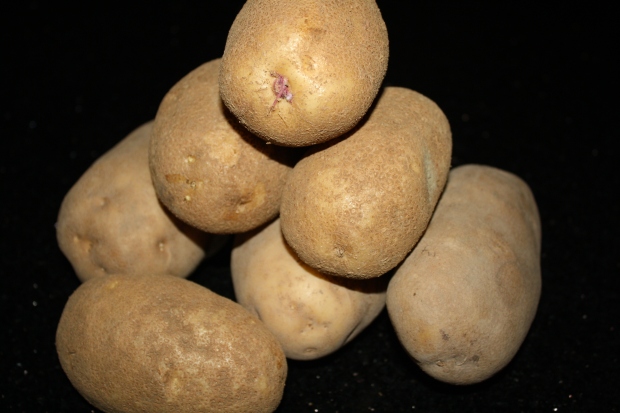 The original blogger boiled first, and then peeled, but I peeled and diced first and then boiled them for twenty minutes as if I were making mashed potatoes. You can do it either way, but I thought it would be easier to peel and dice when they were raw, plus it cut the cooking time in half.

After 20 minutes, I removed them from the pot with a slotted spoon and let them cool in a large bowl for about an hour. Then, I took the potato ricer….

….and mashed the potatoes. 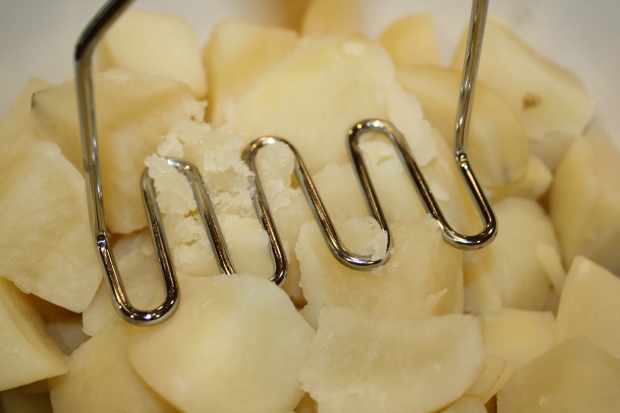 Once the potatoes are mashed and smooth, you can start to add the salt and flour.

Then I mixed it with salt and flour, adding the flour 1/2 cup at a time until the dough had the right consistency. I also threw in about a half-cup of grated Romano cheese to give the gnocchi a little more flavor.

Then, I pulled out one handful at a time to make individual dough balls that were each about the size of a tennis ball.

On a floured surface, each ball was rolled out to make a long rope, that was about twelve inches long. 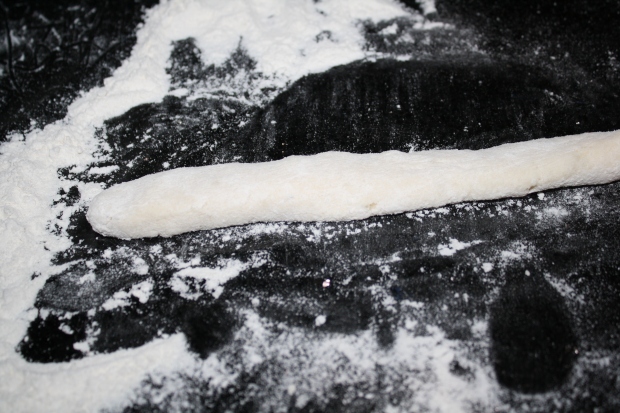 Using a fork, I cut the rope into 1/2-inch pieces…

…and rolled each of those pieces into little balls… 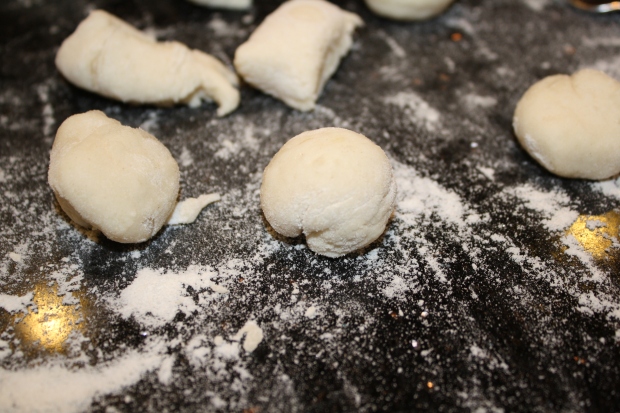 …that were then slightly  flattened and scored with a fork that was dipped periodically in flour to prevent sticking, and laid out on waxed paper. 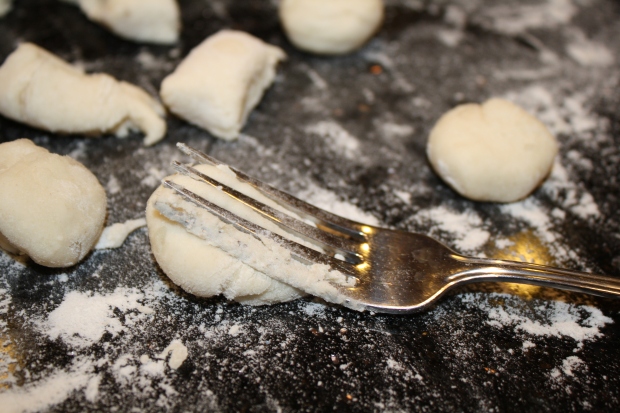 When it was time for dinner, the gnocchi went into a pot of boiling water. Once they had floated to the top, I let them cook for one more minute before removing them with a slotted spoon.

We served them with a chunky marinara, and they were delicious. Overall a lot of work (about four hours from start of the project to the table) but totally worth the effort.

← There’s No Shortage of Butter in this Shortbread Recipe
Potato, Potata, It’s Not Quite Piccata →