Flipping Easy — A Bird in a Crock Pot

Sometimes on a Monday, you just don’t feel like cooking dinner, know what I mean? It’s a good day for something that’s easy to make in a crock pot, like this roasted chicken. The photo on Pinterest looks like this: 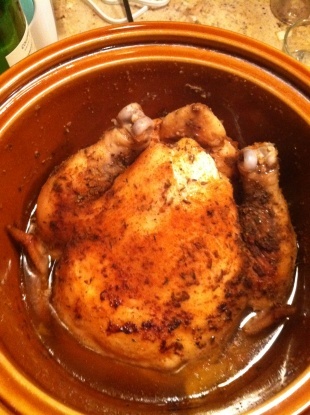 Clean your chicken and remove giblets and neck.  Rub spice mixture all over the chicken.  At this point you can seal it in a bag and let marinate over night.  But if you don’t have the time you can skip this. Dice up 1/2 onion and put at the bottom of the crock pot.  Place spiced chicken on top of onions.  There is no need to add any liquid.  As your chicken slow cooks you will be amazed on how much juice you will end up with.

Slow cook on low for about 8 hrs.  You can use a thermometer to check to see if your chicken is done.  It should read 180 deg.  Or even simpler, wiggle a leg and if it’s loose, it’s done!

Very easy, though for my bird, and my pot, eight hours were too long.

First I prepped those spices and rubbed them on the chicken.

Then I diced a medium onion and put it in the bottom of the crock pot.

And then the bird went in. My crock pot was a little bit small. Either that, or my bird was too big.

But I made do and stuffed it down in there until the lid just fit.

And I left it to cook. As Sloppy Joe had said, there was no need for any liquid as the juices from the chicken collected in the bottom of the crock pot.

But I had a hard time telling when the bird was done. I kept waiting for the little button to pop like it would in the oven, but that didn’t happen.

I put the chicken in around 12:30, and by 6:45 everyone was hungry so I took it out, even though the button was still flat. As I pulled it out, one of the wings fell off, so I figured that was a good sign that it was cooked all the way through. 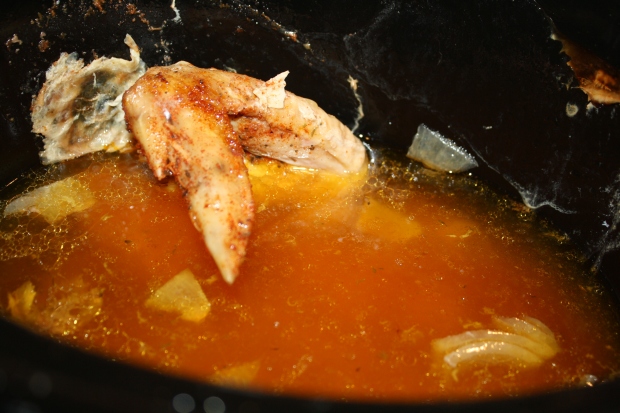 I let it rest for about five minutes and then carved it. 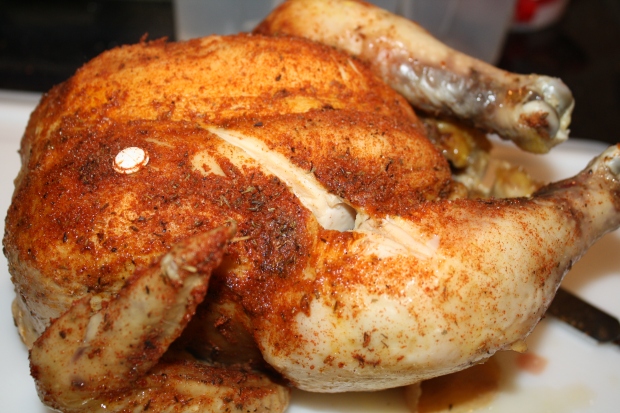 It was tasty, but a little dry. I think I definitely could have pulled it out of the pot at 6:15. My point is, don’t wait eight hours before you test for how well-done it is, because by then it might be too late.

I don’t know if I would cook this in a crock pot again. Mostly because my crock pot is so small. I have an electric roaster oven that does the same thing in about two hours, and the clean-up is about the same.

2 thoughts on “Flipping Easy — A Bird in a Crock Pot”