Glazed Donut Muffins – Not Quite as Good as the Real Thing

Fact: Donuts are one of the best tasting things in the world. Done right, they are soft on the outside, airy on the inside and just sugary enough to nearly melt on your tongue. No one is sure where the idea of donuts came from, but their popularity in the United States is usually attributed to Dutch immigrants around the middle of the 19th Century. They were around before that, but they didn’t really break out until 1847, and since then, they have become a staple of what is considered “American” food, though there are versions of the donut that are made throughout the world.

I’m going to go out on a limb and guess that the donut really became popular during the Great Depression, when they likely made a cheap breakfast when accompanied by coffee. (Auntie Em offers some crullers to the boys on the farm in The Wizard of Oz, 1939, the year they were also offered en mass at the World’s Fair in New York.) Krispy Kreme was founded during this period as well (1937) taking a uniform product to the national stage.

While all that may be fine and dandy, the fact is that donuts are ultimately a calorie-laden dessert food. Fried in oil and covered in sugar, they are a treat in which I rarely feel hedonistic enough to indulge.

And I have never made them because witnessing the dropping of sugary dough into a trough of hot oil really just underscores how unhealthy a treat they are.

So, I was pretty psyched to find the idea of a Glazed Donut Muffin on the boards. The word “muffin” just lends it a more healthy flair. It may not have the fiber of a bran muffin, but at least it’s not fried, right? The photo on Pinterest looks like this:

Directions
1) Preheat the oven to 425°F. Lightly grease a standard muffin tin. Or line with 12 paper muffin cups, and grease the cups with non-stick vegetable oil spray; this will ensure that they peel off the muffins nicely.
2) In a medium-sized mixing bowl, cream together the butter, vegetable oil, and sugars till smooth.
3) Add the eggs, beating to combine.
4) Stir in the baking powder, baking soda, nutmeg, cinnamon, salt, and vanilla.
5) Stir the flour into the butter mixture alternately with the milk, beginning and ending with the flour and making sure everything is thoroughly combined.
6) Spoon the batter evenly into the prepared pan, filling the cups nearly full.
7) Bake the muffins for 15 to 17 minutes, or until they’re a pale golden brown and a cake tester inserted into the middle of one of the center muffins comes out clean.
8.) In a medium bowl, prepare the glaze by mixing together the melted butter, confectioners’ sugar, vanilla and water. Whisk until smooth.
9.) When muffins have cooled slightly, dip the muffin crown into the glaze and allow the glaze to harden. At this point, you can leave them as is or go for the double dip. I glazed my muffins twice.
10.) Serve warm, or cool on a rack and wrap airtight. Muffins will keep at room temperature for about a day.

First I creamed the butter, shortening and sugars together in the mixer.

Then I mixed in the eggs before adding the baking powder, baking soda, cinnamon, nutmeg and vanilla.

Then I added some of the flour, 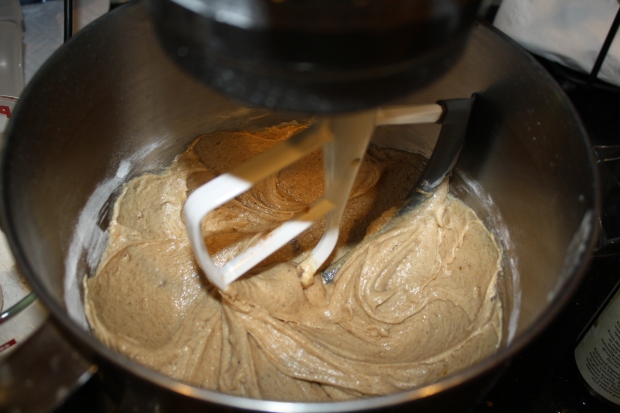 and then some milk,

and alternated those until the batter was smooth. I did begin and end with the flour, though I am not sure what the reason is for the process.

Next, the muffin cups were filled by 2/3.

And then they baked for 15 minutes at 425 degrees.

Once they had cooled, I made the glaze, 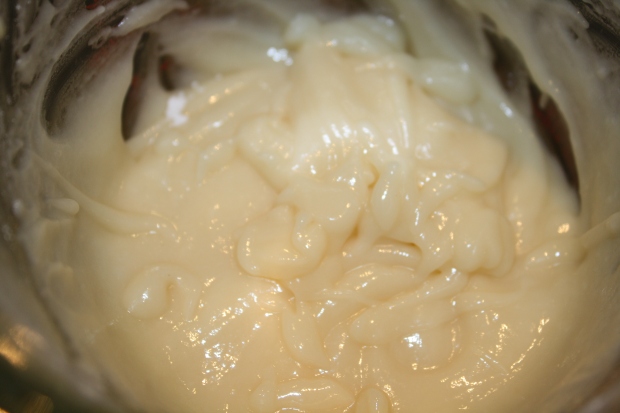 and dipped them into it.

The result was sweet, but not much of a substitute for an actual donut, at least, not if you are partial to the kind of glazed donuts I am, which is the Dunkin Donuts kind. The muffins were dense and heavy, and not really as sweet beyond the icing. I had hoped that they would be softer the next day, once the glaze had been absorbed into the cake, but they were not. And to be honest, they weren’t really much of a muffin either. They were kind of a cross between a muffin and a cupcake, so if you are really looking for a muffin, I don’t think they would be satisfying.

Bottom line: Meh. Even the kids didn’t take to these, and by day three, most of them went into the trash.