After yesterday’s biscotti, I had some leftover pumpkin puree and was looking for things to do with it, when I found a recipe on the boards for pumpkin cupcakes.The photo on Pinterest looks like this:

Preheat oven to 350°. Line a cupcake tin with cupcake wrappers.

Fill cupcake liners 2/3 full and bake about 20 – 25 minutes, or until a toothpick inserted comes out clean.

I had to start this twice, because, as I have mentioned before, I am a bit of a dolt. I mixed the cake mix according to the instructions on the box, and then added the pumpkin, but that was the wrong way to do it. Maybe you could do it that way, and just bake it longer, but once I had realized my mistake, I started over. First I added the pumpkin pie spice to the dry cake mix.

Then I added the pumpkin and the water,

and mixed. Very very simple. I didn’t even need eggs!

Next I put the batter into the cups, 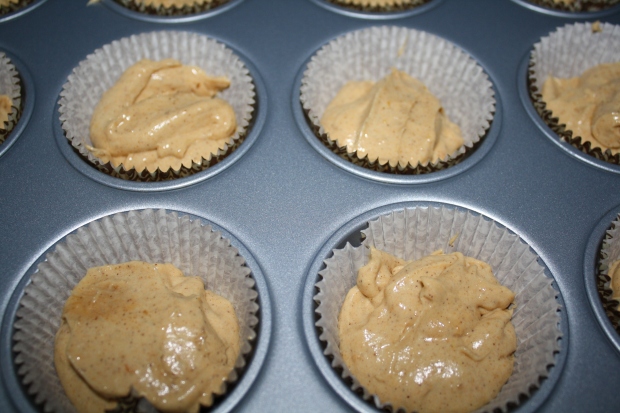 and baked at 35o degrees for 20 minutes.

After they had cooled, I made the icing. Though skinnytaste.com used a pumpkin spiced frosting, I went with a cinnamon cream cheese because, well first of all, after my mistake, I was out of pumpkin, but more importantly, I wanted the icing to compliment rather than blend in with the cake.

Then I piped the icing onto the cupcakes with my handy-dandy icing gun, topping them off with seasonal candies.

YUM. Not only did they taste great, but the smell was heavenly. I will definitely be making these again!!