It’s always great to make a holiday mix, both for entertaining and for giving as gifts. I came across a really cute one on the boards recently that included little Santa hats and decided to give it a try. The photo on Pinterest looks like this: 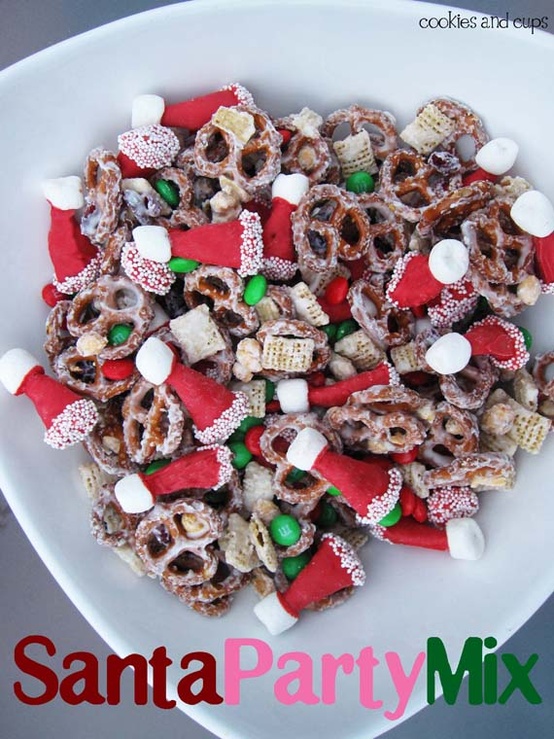 Ingredients:
Bugles
Red Melting disks
Mini marshmallows
White sprinkles (I used nonpareils)
3 cups mini pretzels
1/2 cup craisins
1 cup salted dry roasted peanuts
2 cups Rice Chex
2 cups holiday colored M&M’s
8 oz. white chocolate for melting
Melt the candy melts, along with a tablespoon of shortening (to thin the melted candy), in 30 second intervals on half power in a microwave until melted. Dip Bugles into the chocolate to coat completely.  Let them set for 10 minutes or so on parchment or wax paper.
Spread the remaining ingredients, EXCEPT M&M’s, out on a baking sheet lined with parchment or wax paper.
Melt the white chocolate according to package directions and drizzle over the pretzel mix. Transfer into a large bowl and coat mix with chocolate. Return to baking sheet to allow to dry. When chocolate is set, sprinkle M&M’s and Bugle Santa Hats over the mix. Transfer to big bowl to serve.

I changed up a few things. Instead of Rice Chex, I used Golden Grahams cereal, and instead of using dry roasted peanuts, I substituted peanut M&Ms.

I wasn’t sure how many Bugles or candy melts to begin with, so I got two bags of red candy melts and put them into the microwave with two tablespoons of shortening, but I think one and a half bags would have sufficed, because I ended up with a bit leftover. 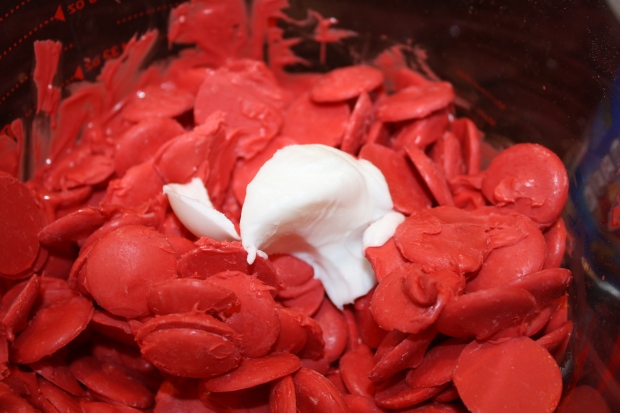 Next, I took two cups of Bugles and dipped them individually into the melted chocolate. This was a bit time-consuming and messy. You have to be careful not to break any Bugles. I used two forks to maneuver and remove them. Cookies and Cups used the caramel-flavored Bugles, which would have been awesome, but I couldn’t find any of those. The regular ones worked fine though. 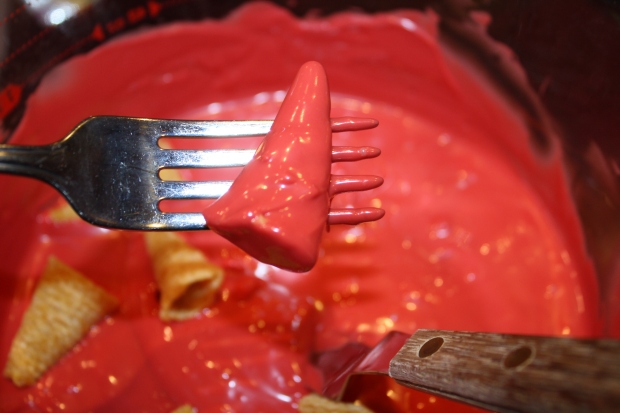 Then I laid the Bugles out on a piece of waxed paper to set. I used Wilton candy melts, and they harden very quickly.

It looks kind of messy, but once the chocolate hardens, you can break off any excess.

Next, I dipped the ends back into the melted chocolate, and then into the nonpareils.

And once they had hardened, I added the marshmallows to the tops.

In a large bowl, I put two cups of Golden Grahams and three cups of Christmas-shaped pretzels. The white chocolate was mixed separately and drizzled over the top of the pretzels and cereal, along with 1/3 cup of confectioners sugar.

I stirred this around until everything was lightly covered with chocolate, and then laid the whole mix out on wax paper to harden. 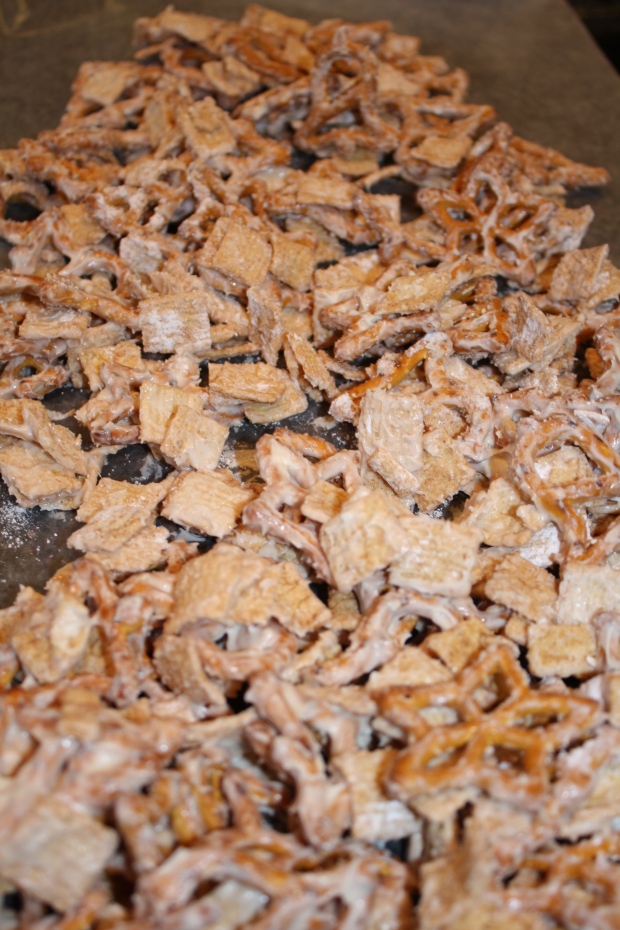 After it was set, I put it back into the bowl and mixed in the craisins, M&M’s and Peanut M&M’s.

The result was delicious and really cute. We ate a little here, and then packed up the rest to give away!