Let’s face it: Life is full of cords. iPod cords, phone cords, computer cords, speaker cords; they’re everywhere. And they’re kind of unsightly. There are a few nice looking charging stations on the market from places like Pottery Barn and Amazon, but they can cost over a hundred dollars. I wasn’t looking for something that would necessarily be displayed prominently in my home, but something that would keep all the cords organized and in a central place would do the trick. There were a few options on the boards, but I chose one that could be made from a simple shoebox. The photo on Pinterest looks like this:

It was pretty easy to make. I had some leftover scrapbook paper from New Year’s Eve to cover the box.

Using Mod Podge, the box was covered with the paper, and then sealed with a top coat.

Then I used an Exacto knife to cut circles for the holes, and some grommets to cover those, securing them further with a bit of Gorilla Glue.

Then I took a surge protector, and this one is pretty cool because it not only has electrical sockets, but it also has a couple of USB slots. I also cut a larger slot in the back of the box here for the electrical cord to exit. 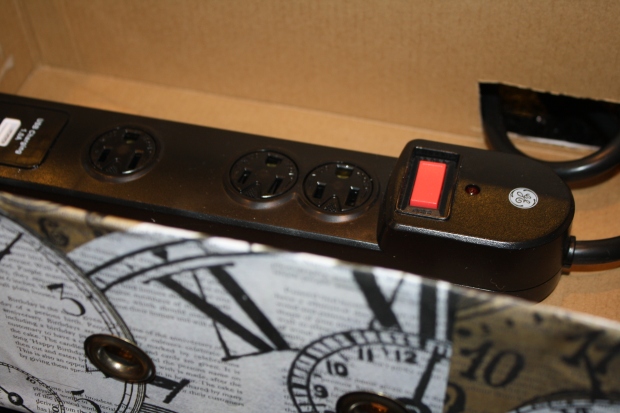 And then it was good to go! If I had to do it again (and I might), I would use slightly larger grommets, because some of the cords didn’t fit through the holes, but in the case of the older iPod charger, I just ran that out the back with the electrical cord. Does the job, and everything is centrally located. 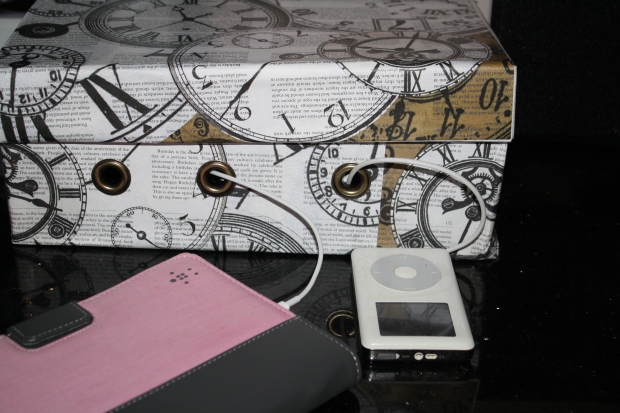