Accidents happen. And when you have kids, they seem to happen a lot more often, am I right? In my opinion, you can never have too many first aid ice packs on hand. We had a nice one for a while, but somebody (ahem, Clooney) squeezed it too hard, so it broke. I had been looking to replace it, but couldn’t find one that was the same size or had the same kind of stuff inside. However, thanks to Pinterest, I found an easy way to make one on my own. The photo on Pinterest looks like this:

Photo courtesy of the Fun Cheap or Free Queen

I decided to triple bag this one for extra protection (ahem, Clooney) using Quart-sized Ziploc bags. First, I started out with a cup and a half  of dishwashing liquid.

To that, I added a third of a cup of rubbing alcohol. Now, I used 91% because I had some leftover from my hand sanitizer debacle, but I don’t recommend using 91% because if your bag does leak, that stuff burns like lemon juice on a paper cut. Any rubbing alcohol will do.

I also added about half a cup of distilled water, just to give the pack a little more weight, and also because I thought it would give the finished product a nice texture like our old ice pack, a hunch that turned out to be right. So then, I got as much of the air out of the bag as I could, and like I said, triple bagged it. 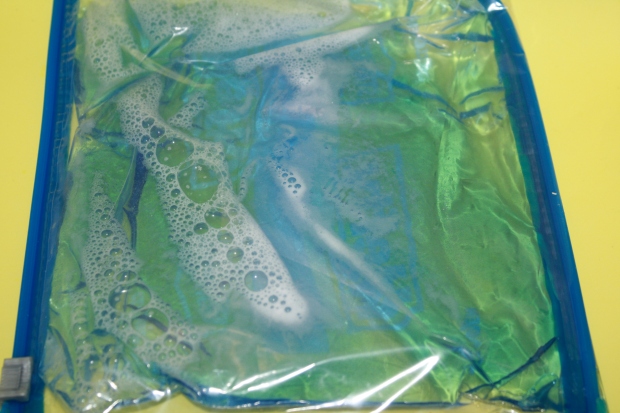 And then it was ready to be frozen. 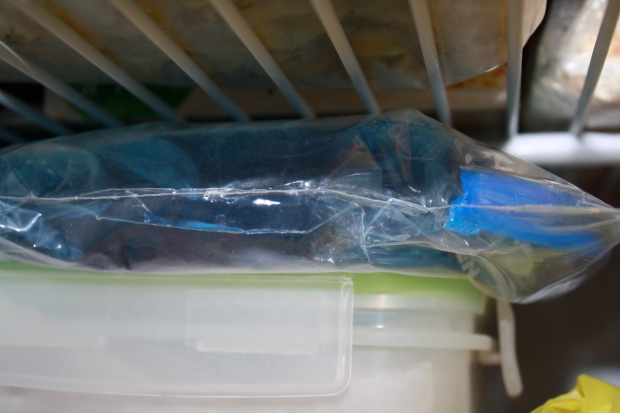 It barely had time to freeze before someone needed the thing.

And it worked perfectly. The only thing I might recommend is that instead of using Zip-loc, you use one of those ones that seal, because if you squeeze it, the bag will leak. (Ahem, Clooney) Someone had also suggested that the Zip-loc could be sealed with super glue, but I have yet to try that. Thanks to The Fun Cheap or Free Queen for the great tip!