Time for another episode of Frugal Friday…or is it?

If you’ve ever been on Pinterest, you’ve probably seen the claim that you can clean your toilet with Coca-cola. The claim is fairly ubiquitous and shows up every few weeks in the “Popular” feed, so I decided to give it a try. Now, before you judge me on the basis of how this toilet looks, I want to tell you a few things. First of all, it’s the toilet in the bathroom that my sons share, which should be ’nuff said, but you should also know that this toilet was thoroughly cleaned with professional-type cleaning products the day before this little experiment took place.

I didn’t have a 2-liter bottle of Coca-cola on hand, but I did have a few smaller bottles, so I used two of those.

Sorry it’s so blurry, but I wanted to show that I used The Real Thing. 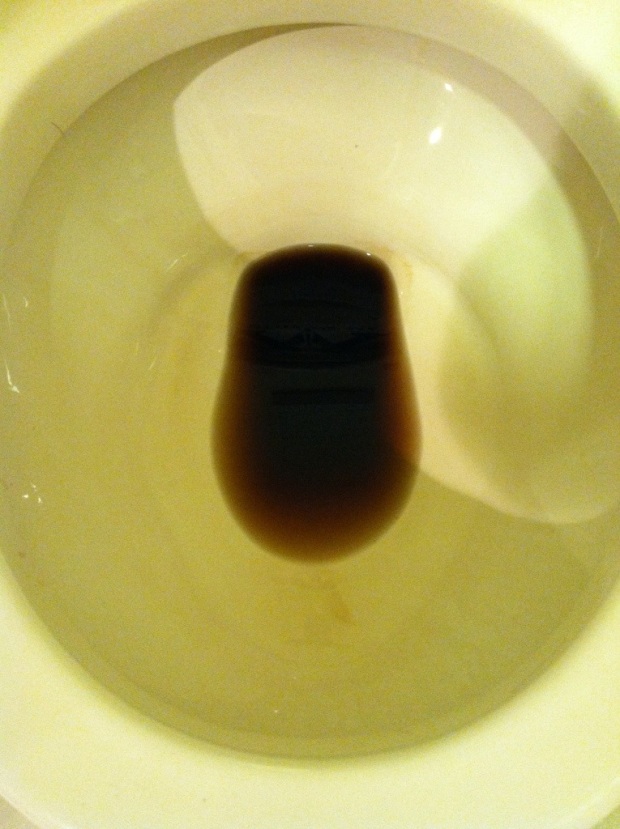 I let it sit for about three hours. And then, for good measure, I gave it some swirly-whirlies with the toilet brush, 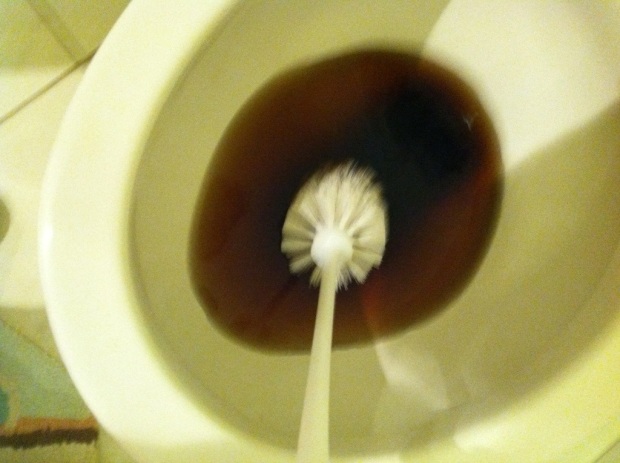 but after the big flush…

Nada. Also I would like to point out here that there is no way that Coca-cola would sanitize your toilet, which is kind of an important component to cleaning one’s toilet. Or maybe I’m just funny that way. In any case, I don’t see how this is really a frugal type of cleaning product, since a 2-liter bottle of Coke will set you back about two bucks (on sale), and can only be used once, whereas a bottle of Scrubbing Bubbles, or Lysol Toilet Bowl Cleaner will cost $3-4 and can clean the thing dozens of times. See what I’m saying? I’m starting to thing the whole idea may have been started by the Coca-cola corporation just to sell a few extra bottles of swill.

In an case, I started to think that perhaps it was the effervescence of the soda that was the cleaning agent, so I decided to try some denture cleaner. (I had some on hand for cleaning the kids’ retainers.)

I put in several tabs and let those “work” for a few hours as well.

But it still had no effect. I don’t know what these kids have done to this commode, but I think I’m going to need to call in a professional…or an exorcist.

One thought on “Frugal Friday – Coke as a Toilet Bowl Cleaner”