I have two boys, so you know we have lots of LEGO. I don’t know who the marketing geniuses are over there at LEGO, but they are the greatest minds of their generation. I mean, all over the globe they’ve sold their tiny plastic wares, and when you get right down to it, LEGO collecting is nothing short of an addiction.

A few years ago, LEGO started putting out mini-figure series and selling them like trading cards. As you can imagine, they’ve sold like wildfire. And so our bedrooms and basement became populated with mini-figures and their accoutrements.

A few weeks ago, my friend at 365 Days of Pinterest posted a display system for mini figures on the boards. The photo on Pinterest looks like this:

I really liked her design, so I went looking for sheet metal and wood to put a board together, but then I thought: it might be easier to just use a white board and magnets. I searched in the basement and found a number of 2 x 2 bricks and stuck magnetic tape from the craft store to those. 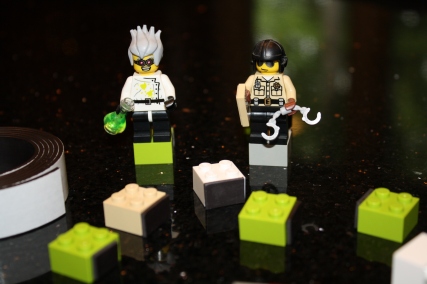 Originally I put the minifigs straight onto the 2 x 2 bricks, but later opted to keep them on their original pedestals.

Super easy to do, and if you don’t have any 2 x 2’s lying around, you can use 2 x 4’s. I kept all of the mini figures on their original black pedestals because some of the accessories, like the surfboard and snowboard, need the extra space. Also, some of the figures are wider, like the hockey player and the Native American chief, so they need to be angled a bit on their pedestals.

The great thing is that the figures are still accessible if the kids want to use them to play or make stop-action movies like this one Edison put together last summer:

Plus, you can add to the collection whenever you need to. Overall, the project cost about $30, but if you use a smaller white board (I used a 29 x 35 inch one) you could make it for less.

← Homemade Bubble Bath….Take Me Away!
A Mother of a Tater-Tot Recipe →